Western Australia – it’s a great big piece of land that’s the second biggest state in the world; is the home to Perth, one of the world’s most isolated city; and has over 12,500km of coast line – that’s a lot of coast. Yes this state is massive, and yet, doesn’t seem to be a top destination in Australia. Living on the east coast, I always thought WA was too far (and yes this is true) and never found the time to go. But I was thinking about it a lot recently, with many signs telling me to go – from random commercials on TV to my friends sending me links about it. So I decided, yep, it’s time.

I do most of these travels on my own and thought I’d do the same for this trip. I’ve learnt that solo travelling makes you come out of your shell more and I’ve found that you end up meeting more people and experience new and different things as opposed to when travelling with family or friends.

The WA trip that I embarked upon was from Perth to Exmouth. The distance between Perth to Exmouth is around 1,250km and we spent 7 days getting there – mainly because there is a lot to see in between. If you are looking at doing this trip, make sure to stop by and check out these places along the way. (This post is a bit long, but there a plenty of photos 🙂 ) 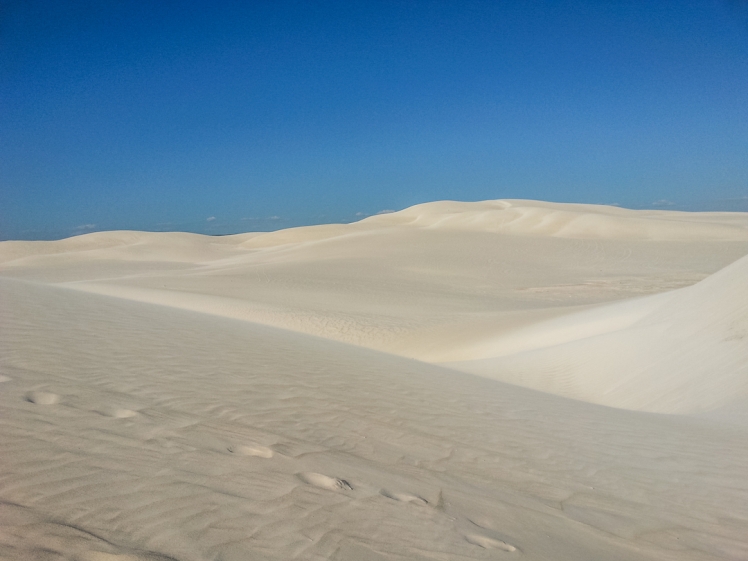 Sand dunes… meaning you can go sand boarding! Make sure you book some sand boards before getting there if you want to try it out.  Taking your 4WD out along the dunes is also something lots of the locals like to do, although be careful if you’re planning on doing this, as they are moving sand dunes so not all dunes are safe to drive on!

These limestone formations are a popular stop and destination for many travellers.  Take some time to explore the information centre there as it’s full of information on the theories of how they’re formed and what local wildlife you could come across (and which ones to avoid). Even until now, it’s still unknown how exactly they formed, with 3 different theories still being discussed today.

Feed some kangaroos, emus, horses, goats, and more! This wildlife park has plenty of those loveable Australian animals. And with a $5 donation you get to cuddle with a joey (baby kangaroo), snake or even pet a dingo. This is a nice little stop over to chill with the locals 🙂 .

Driving right next to the coast

This place is known to be a pretty windy area, so windy that the trees all grow at a slant because of the constant wind! Anyway, we passed through here and I just loved the landscapes. From driving right next to the coastline to seeing awesome sunsets. With the roads being long, the drive can get tiring, so this is also a good spot to stop, stretch your legs and get some energy back.

One of Australia’s famous pink lakes! Apparently there are plenty of these pink lakes around, but this is my first time seeing one so it was a pretty exciting stop over. I learnt that is it also a salt lake. What an interesting natural creation, where the pink hue it created by bacteria that’s trapped in the salt granules.

There’s plenty to do in this national park, so make it more than just a stop over. Maybe spend a night or two here. Check out the Z-Bend lookout and if you’re feeling it, take a hike down to the gorge. A steep and medium-grade hike down the gorge, you’ll find yourself by the serene waters of Murchison River. Although be sure to start the hike down the River Trail early, as it gets pretty hot down there! You can also go abseiling with Kalbarri Abseil, whether it’s your first time or 100th time, it’s a great experience. 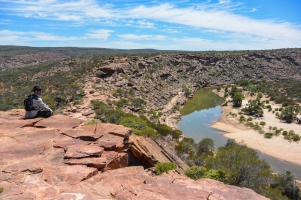 View from the top

Make sure to also check out the view from Nature’s Window. It’s a short drive from the Z-Bend lookout and only about a 1km walk to the window. After the hike down to the river, it’s great to see the bigger picture and appreciate the surroundings from nature’s very own window.

Two awesome quick stops before getting to the scenic Monkey Mia. Hamelin Pool is the home to the stromatolites – one of the only 3 places on earth where you can find them. They’ve played a huge role in determining the planet’s evolutionary history and is said to have produced oxygen needed to create life on earth.

Shell Beach is… you guessed it, a beach full of shells instead of sand. These cockle shells are known to go 10 metres deep!

Another popular destination for travellers, Monkey Mia is known for its calm waters and wild dolphins! Every morning around 7am, wild bottle nose dolphins come up to the shore waiting to be fed. It’s a once in a lifetime interaction with these majestic creatures. This place also showcased some amazing sunsets! 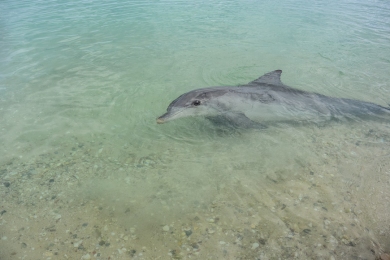 Western Australia’s very own Great Barrier Reef. But unlike the Great Barrier Reef, it’s so close to the shore that you can basically swim to it. The reef spans a length of around 260km of all natural goodness. There are many different tours/day trip options on this reef, from swimming with whale sharks (seasonal), swimming with manta rays or even just going on a glass-bottom boat and enjoy the view from above. Although I highly recommend checking out the underwater views as it’s beaming with life. One of my best snorkel experiences to date.

Amazing colours from the boat

We reached our final destination! Exmouth is found on the tip of the North West Cape. We spent 2 nights here, but could easily spend another night or two. Ningaloo Reef stretches all the way up to here so spend the days exploring the many beaches and reefs around the national park. One of my favourite spots was Turquoise Bay – once you get there, you’ll see how it got its name!

I spent a total of 12 days in WA, and as usual, felt like I needed more time. Western Australia is, by far, one of the most underrated places I’ve been to. It’s enormity already baffled me and then seeing that small percent of the vast natural wonders it offers, just added to my awe and amazement of this state. With not a lot of people visiting the area (compared to east coast Australia), many of the national parks and marine parks are untouched and left to their natural state, with no tourist trap or gimmicks – which is starting to become more rare these days. Whether you’re planning on travelling all the way up to Broome, Exmouth or just to the outskirts of Perth, Western Australia has heaps to see and do.

This site uses Akismet to reduce spam. Learn how your comment data is processed.